This year’s International Day of the Seafarer granted us with a new theme of the day: gender equality and gender gap.
Everything else is just fine and therefore, wasn’t mentioned. Seamen’s IDs, certificates and licenses pile of documents is a meter-high and keep growing. Crews can hardly breath, choked by nooses of total control of their living and working environment, of their own lives, while they’re on board. Ships and crews, in many areas of World Ocean, are in constant threat of being hijacked by pirates or by migrants. The Doomsday of Merchant Fleet, fuel sulphur cap regulation, is right behind the corner, starting Jan 2020. Seamen are hunted like hard-core criminals by insane environmentalists and arrest-happy authorities, throughout the world.

But all those problems are nothing! Gender gap, that’s the plague of the day. I stubbornly stick to old habits of long past, like the habit of applying logic to anything I’m interested in. I can’t take anything on its’ face value, I look for logic, for facts, for proofs. But “progressive” policies and statements defy any logic, shred logic to pieces.
What the hell is “gender”? What’s the meaning of it? Is it person’s sex? No. It was, yes, but long time ago.
“Gender is about the learned social attributes, differences and relationships associated with and applied to being either male or female in society”.
What to make out of this “scientific” definition? I don’t know.

Is “gender gap” a “problem”?
What I’m interested in most, is the reasoning behind this rush. What happened? Why out of blue sky, gender gap and diversity became so imperative? Are there proofs, that “gender gap” is impairing shipping and economy? Are there protesting rallies around the globe, filled with indignant women, deprived of their basic right to become seafarers? Is shipping on the verge of collapse?
That’s how they define non-existent problem:

“A balanced workforce has to be the answer to improve or change company culture, company profitability, and much more”.
“Gender equality is vital for sustainable development” (What is this about? Conceiving and raising children on board of the ships or in the offices?)
Most convincing argument:
“Why is leadership and participation of women good for business?
There is ample evidence that investing in women is the most effective way to lift communities, companies, and even countries. Countries with more gender equality have better economic growth. Companies with more women leaders perform better.”
Got it? Gender equality is good because it provides better growth and performance, by being most effective way to achieve better performance. How very scientific!

There was, once upon a time, a well-known State, State of Soviet Union, proletarian paradise, a wet dream of modern “progressive” SJWs. Gender equality was a State (communist party) policy, propagated and pushed by all the State’s might, from media to enforcement bodies. Overwhelming majority of women were working, not because they wanted to, but because the State – owner of everything, from land to factories, from banks to labor force, – made wages so low, that the majority of population couldn’t survive with just one family member working. To support family, both man and wife had to work.
Communist party media and comissars (comissars = modern NGOs), day and night 24/7/365 non-stop, were bashing population with propaganda, explaining why working woman is an ideal woman, and why housewife is a relic of capitalistic nightmarish past. Well, women had to work, propaganda or not, simply in order to survive and support children. But gender equality didn’t help Soviet Union, it collapsed thanks to its’ economy total failure. Failure was determined, among other things, by “gender equality” policy and practices.
Each and every socialist country had, has, and will have to, widely use women labor. Socialistic economy is so ineffective, that it has to use all available human labor, because it’s a) cheap; b) puts population under total government control – everything is State-owned, so everybody is paid by the State and as a State’s employee, is a subject to total control.

Social Justice Warriors have no facts to prove, that “gender gap” is a problem, non whatsoever. Because it is not a problem. How to present this gap as being a problem? By statistics, demonstrating existing and real difference between men and women employment rate. And by describing the difference as a “problem” – just that, a problem. Why? Different rate is explained by natural factors such as biological difference, by offer and demand, by in short, anything but discrimination. How does the gap impede shipping performance, why? No answer, no facts, no common sense.
Sea labor was and is balanced and harmonized, the number of women seafarers is steadily growing, mostly on account of girls who wanted to become shipping professionals since they were teens, and this enthusiasm of theirs, indeed, makes them very good professionals (not without black sheep, though, – like that hero of human trafficking, “rescuer” of illegal migrants). Market economy and shipping are quite well off, with existing workforce balance, gap and ratio. Slow changes are taking place in a natural way, without fiery Social Justice Warriors around, fighting non-existing evils, existing only in their delusional minds.
Who is obstructing women in their alleged mass advance to gender equality in shipping? How? They have no problem in getting maritime education and becoming seafarers, in modern era. They didn’t have any problem with obtaining shore-based positions in shipping companies before, they don’t have them now. 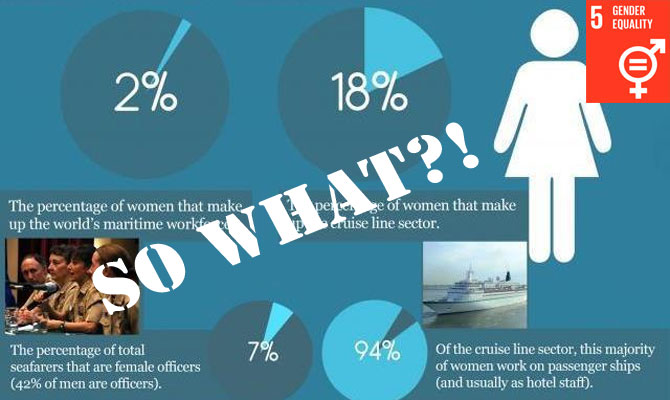 So, what’s all about? It’s about power, it’s about control.
So, what’s all about, why hysterical campaigns and proclamations? What’s their real goal? No secret, no rocket science – it’s one more step in taking control over shipping, it’s socialism (UN-lead) on the march. Can I prove my claim? Why, look at what they propose, by what means they’re going to fill “gender gap” with women bodies, they spell out everything, loud and clear:

“Quotas have been put in place by business leaders in other industries and, however forced they may seem, it’s potentially a good way to kick-start real change”. Or the same idea, but spoken in Orwellian new language:
“The Women in Maritime charter, developed by industry body Maritime UK, creates a framework to challenge companies to make progress on diversity, and is supported by a suite of toolkits to help companies realise those targets”.
“Gender equality is vital for sustainable development. Join our Day of the Seafarer campaign to promote seafaring as a career for women. I’m on board with gender equality at sea. Are you?”
“Maritime UK has launched its Women in Maritime charter with 100 companies already committed to addressing the challenge of gender diversity within the industry. Maritime minister Nusrat Ghani said at the charter launch, “The workforce should be reflective of the population”.”
“We need to do more to bridge this gender gap by bringing greater awareness of this profession to the masses”.

Building menstrual gap bridge
I was told a story by old-timers, river boats captains, on how did one such captain build a bridge over gender gap. It happened in Soviet Union, in times of Stalin rule. Captain found himself in command of all-women crew, on board of river steamship. And here comes the problem – the most hard, most physically demanding job was of course, in fire room, that of fireman and trimmer. Not by all means suited for women, especially for women having their menstrual period. All women in that crew did fire-room job in turns, notwithstanding their rank and position, on a general agreement, that those of them who’re experiencing their period, are freed from fire-room duty. But soon, periods began to overlap, women began disputing their turns on the grounds of having “period”, and blaming each other on cheating, to avoid hellish job in fire-room inferno. Soon, the crew turned into violent mob of quarreling furies. Those were brutal times, and if the ship failed to carry out ordered task, ship’s captain could be executed or sent to GULAG, as a saboteur. So for captain, disabled by quarrels crew, unable to perform its’ duty, was, literally, a death sentence.
Captain found a solution. He made a timetable of “periods” of each woman in his crew, by his own reasoning and his calculations. And made his “period” schedule an order. Anyone disobeying could be, therefore, declared a “saboteur”, and handed over to the secret police NKVD.
Gender equality miracle transcended the biology of human body – there were no disputes any more, all women obediently carried out their fireman watches, in full compliance with captain’s “designated periods schedule”. Remember gender definition “Gender is about the learned social attributes…”? Change social attributes, and you’ll change human biology. Very simple, and very effective, especially if there’s murderous secret police nearby.

Walking gender gap bridge
I was a cadet on board of general cargo ship which called Wonsan port, North Korea, to load cement in bags. Port workers team of some 50 people boarded the ship, they’ve been manually handling 50-kilo cement bags, downloaded into hold by crane, in net, taking them out and piling in stacks around the hold. At least third of team were women, hardly discernable as such, all covered in cement dust, all dressed in the same gray trousers and tunics of a very cheap quality. They have been, visibly, severely undernourished. Women have been handling heavy bags on equal terms with men, no latitude given. I can’t even describe what they eat for a lunch, it was brought and lowered into hold in two buckets, no sticks, no spoons, no forks, no bowls. It wasn’t even some hot brew, it was something icy, like ice cream, on sticks. We’ve been told by stevedore, that that was iced, very nourishing, stuff. If there is such thing as gender equality, I saw one, in cement carrier cargo hold. Later, close to evening, some women gestured to us, crew, inviting us to have sex with them down in hold, between bags. Not for money of course. For bread, which was to be given to them immediately, to be eaten right away. They couldn’t take bread with them – guards would rip them off bread, and beat them, for all their trouble.

All leftist lovers of gap bridges and social justice do lack one thing, they lack knowledge. They’re astoundingly ignorant, even worse – they’re aggressively ignorant. They fanatically believe in all that trash they’ve been taught by their marxist professors, and they hate anyone exposing their ignorance. They have no idea of what is it they’re playing with, of horrendous destructive power of leftist ideology and practices.
History teaches us, that there’s nothing in this world, which can’t be destroyed by leftists rule. Destruction comes real fast. One day you are a Social Justice Warrior, building the bridge over gender gap, next day you find yourself staying on bridge you built, trading your body for food.