A unified command is continuing to respond after at least two barges struck the I-10 San Jacinto River Bridge near Houston on Sep 20.
The unified command consists of the Coast Guard, the federal on-scene coordinator; Texas Department of Transportation, the state on-scene coordinator for transportation and infrastructure; Texas General Land Office, state on-scene coordinator monitoring for pollution; and Canal Barge Company Inc., New Orleans, the responsible party.
There is currently no health threat to the public. As a precautionary measure, Harris County, Texas, and OMI Environmental Solutions have deployed air and water monitoring teams on the river and on shore.
At approximately 1200 LT Sep 20, nine barges broke away from their moorings at the San Jacinto River Fleet, north of the San Jacinto River bridge.
Six of the barges have been recovered. Two of the barges are currently stuck beneath the I-10 San Jacinto River Bridge. These barges include Canal Barge’s 11,689-bbl. CBC1403 containing naptha and the 16,938-bbl. CBC193 containing monoethylene glycol.
One of the barges is currently beached on a mud flat north of the bridge — CBC1407 containing lube oil.
There are no reports of pollution from the barges involved in this incident.
Reportedly, bridge was close for all traffic after the crash, being seriously damaged. 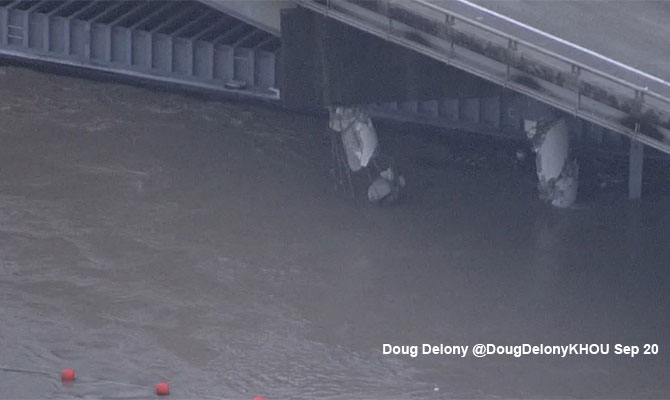 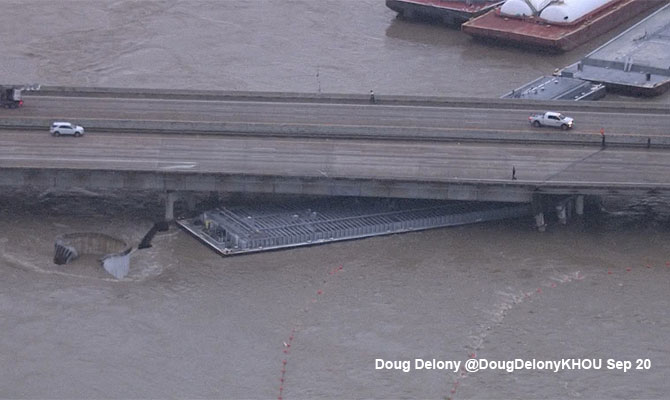