Unfortunate general cargo ship MEHMET BEY ran aground again, yet unable to reach her port of destination Iskenderun. On Aug 7 she ran aground again, this time in Fethiye Bay, Turkey. The ship loaded with wheat was troubled in Greek waters on Aug 2 and while fixing mechanical problem, ran aground. On Aug 7 she called Fethiye Bay after Greek waters mishap, to reportedly, change some crew and replenish provisions, and ran aground in the evening Aug 7, while approaching anchorage. Master said the ship ran aground while maneuvering to avoid collision with fishing vessel.
As of 1340 UTC Aug 8 she was still aground, with tug at her side.

Turkish freighter troubled in Greek waters, status unclear
August 3, 2019 3:00 pm
General cargo ship MEHMET BEY encountered mechanical problems and had to enter southern Samos island waters, Greece, Aegean sea, on Aug 2. The ship understood to be anchored, in the morning Aug 3 she started moving, in restricted maneuverability status, as of 1500 UTC Aug 3 was near anchorage site, looking to be not under control. The ship is en route from Amaliapolis mainland Greece to Iskenderun Turkey.
Aug 4 UPDATE: According to CG report, the ship was for some time aground on a sandy bottom, no hull damages found. She managed to refloat by own means. Initially, the ship encountered engine problem and informed CG on necessity to anchor and carry out repairs in Greek waters. 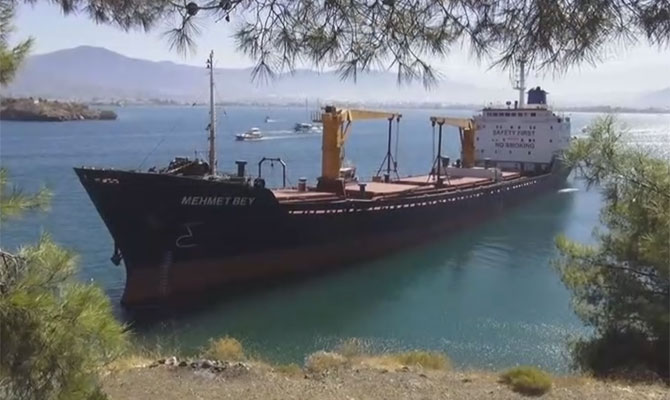